Last month, Juncker surprised friend and foe with his extremely positive “State of the Union” speech about the future of Europe. Even though the role of the European Union is up for discussion, Juncker has a clear vision: “the wind is back in Europe’s sails”. PitPoint clean fuels is most enthusiastic about Juncker’s promise that Europe will become a leader in the fight against climate change. We are definitely looking forward to the new proposals that the Commission will make to realise this.

Alarming report from the European Court of Auditors

A week after Juncker’s promising words, the European Court of Auditors sounded the alarm bells with a new report about EU’s performance in the area of energy and climate change. The conclusion is clear: more effective measures are necessary to stop climate change in its tracks. It is mainly the energy sector that must be drastically overhauled. The production and use of energy are responsible for 79% of all greenhouse gas emissions.

Sufficient reason for the European Union to take action. The emissions of all modes of transport must be reduced by stimulating the use of renewable fuels, mainly biofuel and electricity. Ten percent of all energy that is used in the transport sector must come from renewable sources by 2020 at the latest. The use of other alternative fuels with low emissions such as hydrogen is also being encouraged. The European Union has, moreover, set common standards for the infrastructure for alternative fuels such as charging and filling stations. In addition, member states must now develop an infrastructure policy.

Such recommendations are very welcome and make us optimistic: will Europe make a serious attempt to achieve the Paris Climate Agreement goals?

This optimism is also due to the surprising presentations of car manufacturers during the Frankfurt Motor Show, the IAA 2017, last month. A clear message emerged: it’s showtime for clean fuels. An unprecedented number of compressed national gas (CNG) models were presented during this show. Some manufacturers also emphasised that the combination of CNG and renewable energy can really achieve vehicles without emissions and therefore will play an important part in the future of clean fuels.

The Dutch students of Team Forze Delft were also at the show in Frankfurt this year, with the Forze VII. This hydrogen-electric racingcar is the pride and joy of TU Delft, and of PitPoint: we are the main sponsor of this innovative team. By offering financial support to Forze Delft and exchanging knowledge about hydrogen as a fuel, we hope to get closer that bit closer to our goal: a society in which 100% clean transport is available and affordable. 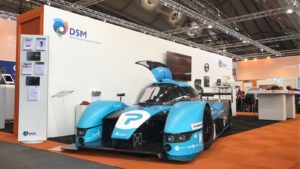 Presentation of Forze VII during IAA 2017 in Frankfurt

In Frankfurt, Volkswagen also announced that it wants to invest significantly in clean fuels by putting aside 70 billion for this. A desperate attempt to restore its image? No doubt! It is now two years ago that Dieselgate came to light, but the consequences of this can still be felt. Have car manufacturers and governments in Europe finally learned their lesson after this affair? We hope so! As to governments, Juncker’s speech and the European Court of Auditors’ report are, in any event, a good start. Now we just have to wait and see, if the European Union puts its money where its mouth is: does it make sure that its measures are actually implemented, and deliver the promised results. If it does, that would be another good reason for us all to be optimistic about clean fuels!