New LNG filling station on the A17, in the heart of logistics hotspot Roosendaal

By pressing the start button, the alderman of Roosendaal René van Ginderen and director Gert van Overveld of Transport Van Overveld (TVO) officially opened the latest LNG filling station of the Netherlands, in Roosendaal. This PitPoint.LNG’s filling station is closely located to the A17, in the center of the Dutch Logistics Hotspot number 1 of 2018, West-Brabant. It is the 25th Dutch LNG filling station at a strategic location in our country.

LNG (Liquefied Natural Gas) is gaining ground in the Dutch national and international road transport sector as an alternative fuel to diesel. LNG burns cleaner than diesel and produces lower emissions of particulate matter, NOx and CO2. Moreover, the price of LNG per kilo/liter is lower than diesel and that price difference has increased further in the last 18 months in favor of LNG. The new LNG filling station is situated at TruckEasy Roosendaal (Aanwas 37) on the A17.

Focus on logistics and energy transition
René van Ginderen, alderman of the municipality of Roosendaal, is pleased with this new LNG filling station in Roosendaal: “The West-Brabant region is recently called the number 1 hotspot of the Netherlands. For us logistics is a priority. The addition of the new LNG filling station in Roosendaal fits in nicely into this. Moreover, it fits within the ambitions of the municipal council to lead the way in the energy transition in the region.”

Making transport better and cleaner
Gert van Overveld is director and founder of TVO, which celebrates its 30th anniversary on the 1st of July: “Since 1988, it has been all about speed, quality and continuity of our business. That includes efforts to make transport better and cleaner as far as we are concerned. LNG is in many ways a smart alternative to diesel: clean, affordable and available throughout the Netherlands and in the countries around us. In addition, the new LNG trucks are as good as the diesel trucks in comfort, horsepower, traction and range.” During the information session prior to the official opening of the LNG filling station on June 7th, participants could also have a look at the new Volvo LNG trucks. 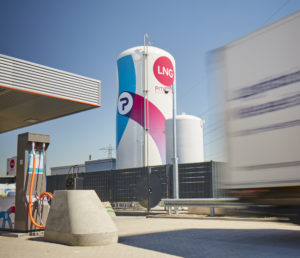 ABOUT PITPOINT.LNG
PitPoint.LNG is a joint venture formed by PitPoint clean fuels and Primagaz Nederland BV. This joint venture is focused entirely on the realisation and operation of LNG infrastructure for trucks and shipping.

The realisation of this LNG filling location is part of the LNG Motion programme. Part-funded by the Connecting Europe Facility of the European Union.This publication reflects the opinion of the authors only. The European Union is not responsible for any use that may be made of the information contained in this publication.