The growing role of sustainability

As a competitive advantage for ports

European ports are busy hubs for the transportation of products from all over the world; at least 99 percent of all consumer goods are shipped by container. European ports in to a large extent the engines of their national economies. This inevitably  leads to strong competition between ports. Unfortunately there is a major downside to shipping. The ships themselves and the logistics around ports cause local air pollution. This damages both the environment and the health of inhabitants of port cities.

Although shipping is usually regarded as a relatively environmentally-friendly form of transportation, it is not as harmless as it appears. Traditional sea going ships that run on fossil fuels emit high concentrations of air-polluting chemicals. The sulphur dioxide (SO2) in the seas bordering Europe caused by international maritime transport is estimated to amount to 2.3 million tonnes per year; That is the reason that around the coast from le Havre to the Baltic sea an emission controlled area is installed where it is not allowed to use fuels with a sulphur content higher than 10 ppm Sulpher. Besides sulphur also nitrous oxides (NOx) emissions amount to 3.3 million tonnes per year and particulate matter (PM) to 250,000 tonnes per year. If nothing changes over the coming years, emissions in 2020 will have risen by 40 to 50 percent.

NOx and the other ship emissions are esponsible for causing lung cancer and heart disease.[1] As silent assassins, these nitrous oxides and soot emissions annually kill 60,000 people around the world. The number of victims could however be drastically reduced by emissions being filtered/reduced. 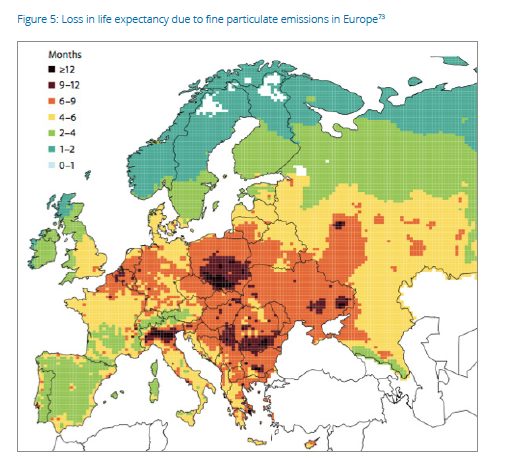 While the public and private sector have been working for years to reduce the CO2 emissions of road transport, there are hardly any similar attempts to achieve clean shipping.  This is strange. Especially because- according to the NGO Transport & Environment- fuel for ships is 2,700 times dirtier than diesel for road traffic. Yet Europe will pay an annual 35 billion for road transport, while ships sail on tax-free fuel.

To reduce their emissions, ships can use filters and make modifications to engines. But there is a better, more efficient solution to improving local air quality by avoiding NOx and soot emissions: alternative fuels. Using clean fuels, such as CNG and LNG, could reduce air pollution caused by ships by nearly 75 percent.

Some ports choose to take the lead and invest heavily in technologies that improve air quality. Other ports choose to do nothing. We believe that is important for ports to take ownership in reducing air pollution and should explore the possibilities clean fuels offer. A new generation of companies like PitPoint are specialists in clean fuels and building CNG/biomethane, LNG electric and hydrogen infrastructures for both maritime transport and local port vehicles. For ports it is important that these companies are profiled as suppliers of clean alternatives for traditional marine fuels.

A simple solution for every type of ship

Depending on the type of ship, there is a clean fuel available that can replace maritime fossil fuels. CNG/biomethane can be used for ships that sail a fixed route within urban ports. LNG is a cleaner alternative for deep sea, inland shipping and long-distance road traffic. By building fixed green-fuel refuelling points, ferries and vehicles can be connected. This means the port as well as all the logisitics around the port can become less polluting and can improve the local air quality at once. 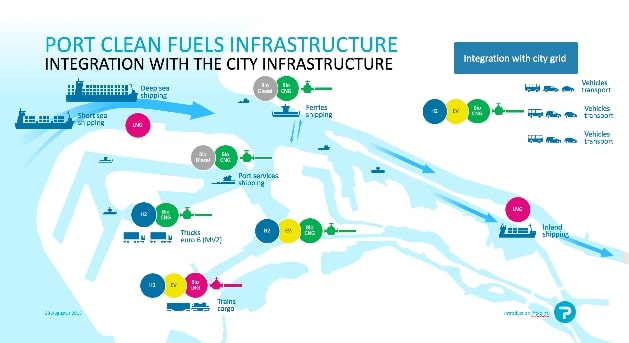 Switching to alternative fuels in ports is beneficial to the health of the population of port cities and the environment. Furthermore is also of commercial interest to ports. For certain types of ships, the total cost of ownership (TCO, all the costs involved in using a product) of LNG or CNG/biomethane is comparable to the TCO of diesel. Moreover, the capital costs for the infrastructure of CNG/biomethane are considerably reduced if it is made simultaneously available for ships and local traffic. Local port, ferry and taxi companies could use the same infrastructure. An LNG station could supply fuel to ships as well as to trucks having to transport cargos further inland.

The bright future of alternative fuels

The popularity of CNG and LNG is steadily growing. 28 percent of the 70 European public transport operators (accounting for 70,000 buses in Europe) have chosen CNG/biomethane as their fuel of preference in new procurements. The Dutch ferry Texelstroom also sails on CNG.

Whether it concerns road or sea transport, CNG and LNG are valuable alternatives to diesel for public transport, parcel services and city distribution. The switch from diesel to an alternative sustainable fuel is possible for virtually any type of transport.

The public pressure on ports to become more sustainable is increasing. We foresee that sustainability will play an important role in competition between ports in the future. Several ports are already connecting to clean fuels. In order to remain competitive, ports such as Rotterdam, Antwerp and Hamburg will have to implement sustainable solutions in their entire logistic chains.