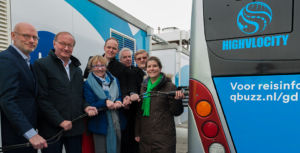 Erik Kemink, CEO at PitPoint, said: ‘We are extremely pleased and proud to be part of this unique five-year pilot programme within the High V.LO-City project and to be able to contribute to the development of the hydrogen economy in the Northern Netherlands. This pilot project directly supports our company’s vision, which is to realise 100% clean transport in Europe by 2030, and clearly demonstrates the importance of collaboration and partnership to achieve this goal. Together we can put the required infrastructure, vehicles and funding in place to make hydrogen a viable zero-emission fuel. We firmly believe that hydrogen is one of the clean fuels that will be fundamental to reducing CO2 and to creating cleaner air in our cities worldwide.’

The Delfzijl refuelling station has been developed through an innovative public-private partnership between the OV-bureau for Groningen Drenthe, Qbuzz, AkzoNobel, Groningen Seaports, PitPoint, the Dutch Ministry of Infrastructure, Public Works and Water Management, and the province of Groningen. 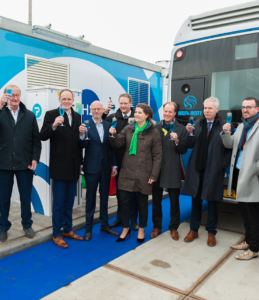 The launch of the station is paving the way towards the deployment of more fuel cell electric buses in the north east of the Netherlands. Fleur Gräper-Van Koolwijk, Regional Minister for the Province of Groningen, said: ‘The launch of this new hydrogen refuelling station is a great start for the further development of green hydrogen in the field of mobility and as such also for making a greener economy as a whole in Northern Netherlands.’

The refuelling station will service the two fuel cell electric buses currently operated between Delfzijl and Assen by Dutch bus operator QBuzz. The two Van Hool fuel cell electric buses are operated as substitutes to standard diesel buses. The refuelling station is located close to the QBuzz bus depot, ensuring a smooth and efficient operation of the buses on a daily basis.

Qbuzz CEO Gerrit Spijksma said: ‘Qbuzz is proud to be part of the transition to zero emission public transport in the provinces Groningen and Drenthe with our two hydrogen buses. The daily operation of these buses is a huge opportunity to show what hydrogen can mean as an energy carrier for public transport. Partnership with the project partners is the other benefit of this project. Participating in High V.L.O-City brings our knowledge to an even higher level’.

This is PitPoint’s second proprietary hydrogen station. In April 2017, PitPoint acquired it’s first hydrogen filling station which is located in Antwerp. You can find more information on PitPoint and hydrogen here. 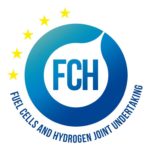